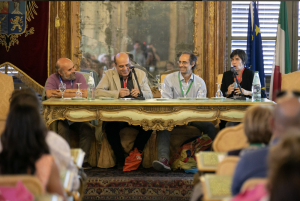 With the aim of promoting a sense of civic participation, intercultural dialogue and the enhancement of the territory, the Academy devotes particular importance to the promotion of didactic, extra-curricular and post-graduate projects in collaboration with external organizations which place cultural heritage at the center of their activities.

If by cultural heritage we mean “a shared set of material and immaterial signs that a group, a society or a nation assumes as a spiritual and material inheritance of its past and decides to preserve in the present and for the benefit of future generations” (Timothy, Boyd, 2003), it is clear that heritage, in its multiplication of elements and in its various transformations over time, cannot be described a priori, nor can it be inscribed in an absolute way within hierarchies of values.

Its essence does not reside in the set of tangible and intangible signs of which it is composed, but rather in the meanings attributed to them: heritage represents traces, links between the past and the present, between one society and another, constructed, always relative, emotional and symbolic.  Working with cultural heritage through artistic practice thus makes it possible to address current and urgent issues concerning the sense of belonging to a community, personal and collective memory linked to history, the need to deal with cultural conflicts and frictions, and the enhancement of the local territory and its goods.

Functional
Functional cookies help to perform certain functionalities like sharing the content of the website on social media platforms, collect feedbacks, and other third-party features.
Performance
Performance cookies are used to understand and analyze the key performance indexes of the website which helps in delivering a better user experience for the visitors.
Analytics
Analytical cookies are used to understand how visitors interact with the website. These cookies help provide information on metrics the number of visitors, bounce rate, traffic source, etc.
Advertisement
Advertisement cookies are used to provide visitors with relevant ads and marketing campaigns. These cookies track visitors across websites and collect information to provide customized ads.
Others
Other uncategorized cookies are those that are being analyzed and have not been classified into a category as yet.
Necessary
Necessary cookies are absolutely essential for the website to function properly. These cookies ensure basic functionalities and security features of the website, anonymously.
ACCETTA E SALVA
Powered by